For our adventure travel trips, we have always tried to balance just enough planning with a good dose of fly-by-the-seat-of-your-pants-and-just-enjoy-the-moment. To that end, we always book our flights well in advance to get the best rates and seats, and book some (very few) hotels that can be cancelled with no fee. Our routes are generally pre-planned, but we are willing to change at a moment’s notice (and have many times). What is always fun on our adventures is coming into a town or place that you aren’t quite sure of and coming out having fallen in love.

Ljubljana, Slovenia is just such a town. We had done a little research to see that it was, in fact, worth visiting and had a few sights to see. We saw that “people watching” was a top activity. The moment we found a good parking spot for our motorcycle just a block from the main square, we knew we were in for a treat. We found three great things to do in Ljubljana that we think any visitor will enjoy.

The river cruise of the Ljubljanica River was so much fun; a great way to see the town from another perspective. We decided to at least see the river in style so we selected the Laker Craft, the beautiful all wooden boat (the only wooden boat on the river) that leaves from the Breg Embankment Pier just south of the main square on the west side of the river. It’s easy enough to find and you can always just follow the boat until it docks. For a 45-minute ride it was only 8 Euro per person, a pretty reasonable price; kids 12 and under are free and drinks were available for a fair price.

It was great to see the city from the river, and as an added bonus we got to travel further down river until we got out of the main city and into a little more nature. We even ended up seeing some beavers at a couple of locations, just minutes from the main square. We were also able to see some of the local homes by the river, some were beautiful, some much more modest, but everyone living on the banks of the river had some form of water transport, from boat to kayak, they all had a way to enjoy the water.

At the end of our day, we had the most unexpected and entertaining part of our visit to Ljubljana. After our pizza and salad lunch/dinner and our fill of the most excellent gelato ever at Vigo, we decided to engage in a favorite past time of people watching. We sat at the base of the statue of France Preseren in the Presernov Trg (Preseren Square) and just watched people as they strolled by, met up with friends, or stared at tourist maps to decide which of the three bridges to take to explore more of the city. As we sat, a quartet of middle-aged men started singing and playing music. It sounded different from what we expected in Ljubljana, more like what you expect to hear on the streets of Istanbul, it just sounded more Middle Eastern. I asked one of the men and he explained the music is from Macedonia, so I guess I was headed in the right direction.

After a short time, people started to gather around to casually enjoy the music on a warm, late summer evening. As more and more people started to gather, from teenagers to young families to older adults, some started feeling the rhythm and began dancing. After about 10 minutes or so of primarily younger people dancing, a couple of the guys from the quartet joined in, as did a few little kids and older people. At its peak, there were probably 20-25 people all dancing, mostly together, all having a great time. We’ve posted a video below so you can vicariously experience what we did in person. (It also selfishly let’s us relive an amazing experience.)

High up on the hill overlooking the rest of the town, stands Ljubljana Castle. It seemed to be a good place to get our bearings and see a good medieval castle. We took the funicular up to the top of the hill and wandered into the castle. They had a slightly touristy but animated and entertaining tour that included people dressed up in period costumes acting out scenes of six decisive periods in the castle’s history to give you an idea of the story of the castle and what it was like to live there. This tour was included in the entry fee we selected, 12 Euros per adult for the funicular up the hill, castle entrance, and the tour, a great deal!

The castle dates to the 11th or 12th century, but was largely rebuilt in the 16th and 17th centuries. The area on which the castle rests has been settled by people since the 12th century BC. In the last few decades, the Ljubljanans have done a fantastic job integrating some very modern design features into the old castle and to my eye, it looks great. From the open-air prison to the gunpowder room, there are lots of place to explore in the castle. Our highlight of the tour was the view from the watch tower that provided a view over what seemed to be all of Slovenia and certainly all of Ljubljana. There’s also a restaurant in the open courtyard of the castle. We didn’t stop to sample the food there, but the plates looked delicious and people seemed to be enjoying themselves.

FOODIE FRIDAY – With a nod of confirmation from the waiter that we had made some good choices, Rebecca picked the black risotto with octopus and I picked the bacon-wrapped pork medallions with pommes frites. 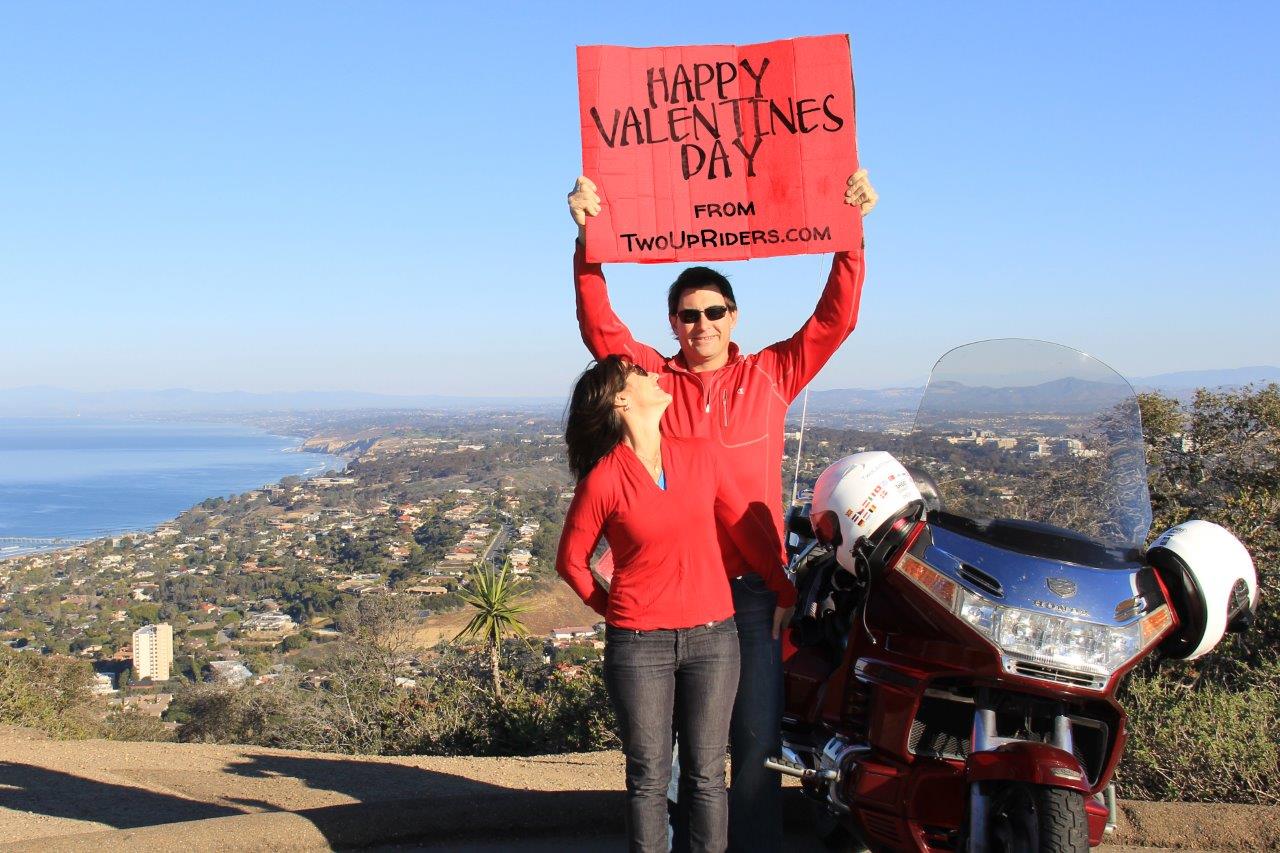 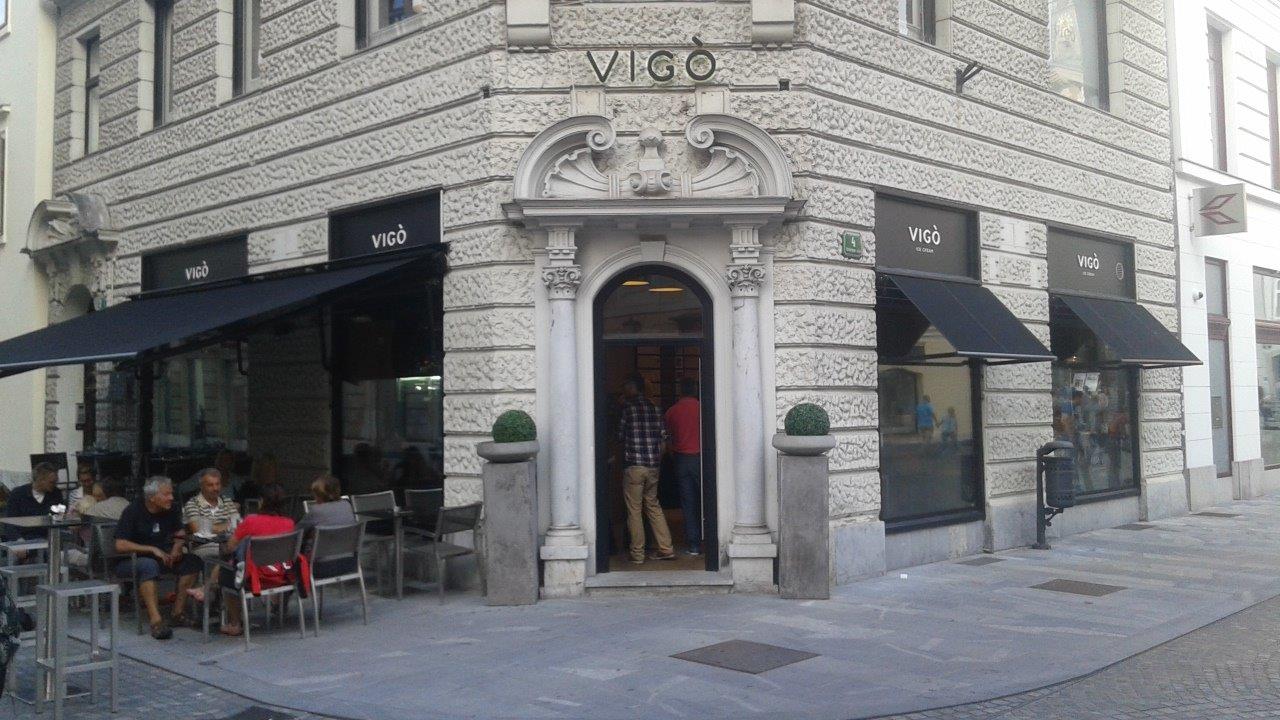